You might think that nerdy grammar geek / copyeditor and radical anti-oppression activist wouldn’t necessarily be a combination that could uniquely change the world, but you would be wrong. With these powers combined, many things are possible, including amazing flowcharts! 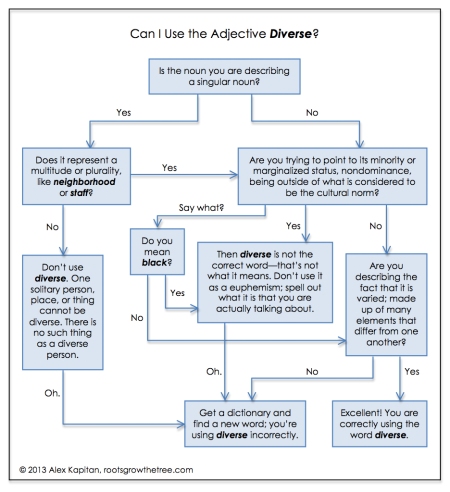 It has long been a pet peeve of mine (wearing both my copyeditor hat and my anti-oppression hat), that the word diverse is widely misused in the English language. Diverse is defined by my favorite dictionary, Merriam-Webster, as (1) differing from one another and (2) composed of distinct or unlike elements or qualities. Unfortunately, the word gets used to refer to people or things that differ not from one another, but from what is considered to be dominant or the cultural norm.

So it may seem like a small act to use the word diverse in a manner that is true to its definition, but it’s a small act with big ripple effects when you refuse to buy into a system that teaches us what “normative” is and then defines everything else as Other. Diverse is not Other. Diverse describes the collective beauty of humanity.